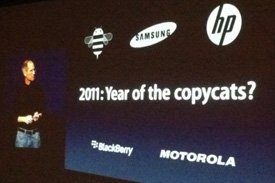 The Apple and Steve Jobs Are Still Afraid of Android, And They Should Be resonates with me. It echoes some of the points I made yesterday.

What I saw at the iPad 2 launch press conference is the old-school Steve Jobs. Doing his best to shape the message, magical & copycats. The exact same technique employed in the early days of the Mac.

Within minutes of making the announcement, the tech journalists were oohing and ahhing. Branding the iPad 2 the device to beat. Never mind that nobody got to fondle a device for more than 5 or 10 minutes, or knew anything about the A5 processor, on-board memory, etc. It did not matter; the tech closet-fanboys media had been wowed, drinking Jobs' kool-aid by the pitcher.

Fortunately for us, people have a mind of their own. Tech pundits are a lot like movie reviewers, pretty much incapable of predicting what the popular choice will be in the end. Doesn't stop them from keeping on trying.