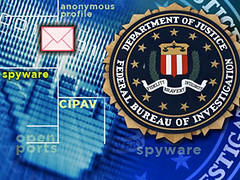 FBI agents trying to track the source of e-mailed bomb threats against a Washington high school last month sent the suspect a secret surveillance program designed to surreptitiously monitor him and report back to a government server, according to an FBI affidavit obtained by Wired News.

NPA-NXX Geolocator is a USA/Canada phone prefix location lookup tool. It uses the first 6 digits of a phone number to locate it's approximate origin on a Google map.
[@862]

Skulls confirm we're all out of Africa

An analysis of thousands of skulls shows modern humans originated from a single point in Africa and finally lays to rest the idea of multiple origins...

Adam and Eve must have been black then.

Translation: Bitch about the war, and we'll take all of your stuff.

AOPA has proposed a four-point plan to help the FAA combat the small number of falsified pilot medical certificates. AOPA President Phil Boyer told Congress July 17, that while the problem was very small, AOPA was concerned and would work with the FAA to solve it.

9 incidents in the last 9 years. Are you kidding me? How many car accidents were caused by incapacitated drivers in the same time frame?

If you have a valid drivers license, you should be able to fly. It is that simple.