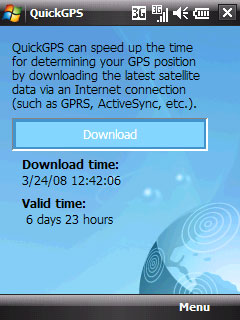 QuickGPS stopped working on my HTC Touch Cruise a few days ago. Each time I would try to update it, I'd get some sort of connection failure.

I did a bit of research and found out that I'm not the only one with the problem. I tried every hack found on xda-developers to no avail; nothing worked.

Without QuickGPS it can take up to 4 or 5 minutes to get a GPS fix. Quite annoying.

I pretty much figured out that the problem was related to one of the hosts QuickGPS uses, but changing the registry keys to a different host didn't help.

I was about to give up when as a last ditch effort I decided to see if I was getting the same problem on my recently upgraded AT&T Tilt… Nope… QuickGPS worked like a charm.

I then decided to copy the QuickGPS registry entries from my Tilt to the Touch Cruise to see if that would fix the problem. It did!

I used Task Manager to replace the entire QuickGPS registry group with the following:

Works perfectly!
Thank you for posting!
I searched for a solution for nearly one week (shame on me).

Thank goodness there are people out there who post some very helpful information.

Hi, I have an HTC Tyten. How or where is the registry accessed so I can attempt to change it.

Do I need a mobile controler program?

I am in the same situation as John above.

Could you tell me how to access the registry to change it please.

Use Task Manager, as I mentioned in my original post. It includes a very nice registry editor.

YES-YES-YES-YES-YES-YES!!! Finally it works again! My bloody registry was probably corrupt! Thanks for the solution. With yours it started working again!

Hi, I must be a total idiot, not being able to get your fix working. Furthermore I am a total nitwit when it comes to registries issue's... Could you help me out? I have downloaded and installed the Task Mng, but what do i do then?

Thanks in advance.
Frans

Download the registry file, put it on your phone, then open it up using the File Explorer.

Thanks for the fix...

For all UK people, it worked on my XDA Orbit and XDA Orbit 2 that I believe are also HTC devices.

Now I don't have to load my GPS software again to the very last minute and not frustrating when I forget and sit there waiting for it to tell me. Simon

Thank you very much. It works! Have spent quite sometime looking for a solution. Thank you once again.

Another idiot - I was born BC. Managed to install Task Manager, downloaded the file and saved it on my Storage card(the name is QuickGPS-Tilt?). Did what you said (I think), but no luck.
It connects, the download starts, the blue line advancing, but then it is the failure window again

YOU GUYS ARE GR8. HATS OFF TO YOU.

Erik, I was actually asking for help. What am I doing wrong?

Zebeth, I wish I could be of more assistance, but as I said before it just worked for me (and apparently a few others); beyond that I'm at a loss.

Thanks Erik, I managed to save it. But then, what's next?

I launched Task Manager, and I chose Create RegEdit Shortcut. It then prompt me "Do you want to associate registry files to TaskMgr". I click "Yes" and then it went back to the previous screen, showing Tabs like "Processes", "CPU Usage" & "Applications".

I then opened up the registry file using File Explorer and it opened up like a text document. So what's the next step?

Sorry if I sounded daft here but I really can't figure this out. Thanks a million.

Make sure the saved file as a ".reg" extension. This way it'll install automatically when you open it up using the File Explorer.

Hi Erik. Ok, the file name is QuickGPS-Tilt.reg. When i open it using File Explorer, it opens up in Words Mobile format, nothing is installed. Where did i go wrong?

Hi, no way to get round the problem i mentioned?

I don't have a WM phone on hand, but isn't there a way to open the registry file directly in Task Manager?

I read comments of all on QuickGPS. I have HTC P3300, excellent and most convenience mobile. However, with QuickGPS same problem as mentioned by many experts in this blog.

My suggestion is to overlook QuickGPS. There is no need of this software. Do not open at all. HTC made a blunder is giving QuickGPS.

If your phone is compatible with MapKing, go with it. Go for GPS, follow the steps. GPS is enabled and you can see map or navigate.

Every GPS navigation software will automatically detect and activate GPS in open area.

QuickGPS does not play any role. I simply deleted QuickGPS. I have no problem with GPS.

Hi everyone. I have an HTC 3G touch and have the same problem. if the quickgps is useless, then how can i just get rid of it? Kumar mentioned that GPS works fine with or wihout quick GPS. So, how can i just use the GPS, overlooking QuickGps??

you are the man .... really worked

eric.i have same problem as david.the file has .reg extension but it opens as word file.when i tried to open in directly from task manager,he won see it.like it doesent exist

I faced a lot of problems with QuickGPS. It never connects and the update failed continuously whether through ActiveSync, WiFi. Now i applied this registry patch. In the first attempt itself it worked like a charm. Really good work.

If someone has one with the same problem and perhaps a fix, feel free to share. I

am losing it with this app. It's driving me NUTS!!!

I have tried hard and soft resets, copied the Xtra.bin file from a working phone, and now finally this registry import. nothing works.

that was brilliant-u're a genius. THANK YOU VERY MUCH !