Once in a while I have to use Subversion on a Linux box. Not a big deal, except for diffs. The standard svn diff output is not the most readable. Vim, or more exactly vimdiff, does a terrific job at displaying differences between files side-by-side. Here's a little Bourne shell script I wrote that uses vimdiff to view the differences between a local file and the latest revision in the repository: 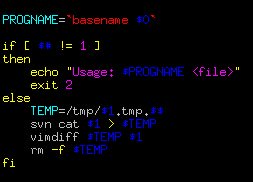 Nothing too fancy. It uses svn cat to get the latest rev, saves it to a temporary file, and opens both files in vimdiff: 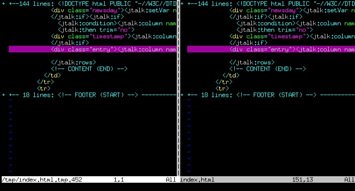 The temp file is deleted as soon as vimdiff is quit.

The --diff-cmd option returns arguments that are not understood by vimdiff. Someone wrote a python hack to re-arrange the parameters, but I find my script much easier to use.

There is a really nice Linux tool for visual diffs, it is called meld (http://meld.sourceforge.net/).

Give it a try, it does understand Subversion and all you have to do is:
$ meld <your_file>

It can also show diffs for a whole folder structure, just use a folder name instead of a file name.

Thanks for creating you script. It works great. And I'm happy to be able to use vimdiff, which I'm familiar with.

I've found it has problems using directories (ie, 'svndiff lib/foo.php') but it works if you change temp file name with this:

Thanks, Francesc. I'll update the script with your suggestion.

Hi Erik,
I don't know if you actually do any editing when you use this script.  I personally don't so I found it useful to do the following:

Only because I tend to leave files open in vim in between commits and I got sick of the error message and whatnot.

I added a option -r maybe it is also interesting for you or others.


You will find my version here
http://gpl.coulmann.de/svn_diff

I would suggest a trap in the begining to make sure the temp file is removed no matter how the script exits.

Thanks for the idea.

I've made a script with the same purpose. It's intended as an argument to the --diff-cmd option, which is usually achieved via a ~/.subversion/config entry. The advantage is that you have all the options of "svn diff" available, such as --summarize.
It also gives friendly names to the Vim buffers -- Subversion passes these as additional parameters.
Furthermore, it ensures Vim syntax highlighting does not break, in the vein of Francesc's suggestion.

Nice script, Carlo. Too bad I don't have gVim to use on my servers.

BTW, I just checked in a new version of the script incorporating all of the suggestions posted here.