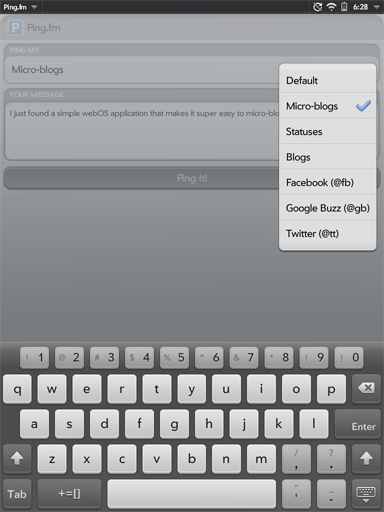 HP approved my updated version of Ping.fm for webOS.

The new version adds support for the TouchPad screen size. That's it.

Russ tested it out for me, and even took some screenshots, on his TouchPad. As he mentioned, one change to the appinfo.json is all it took. Whatta guy!

Based on a classic novel by Edgar Rice Burroughs. The film, directed by Andrew Stanton, tells the story of war-weary, former military captain John Carter (Taylor Kitsch), who is inexplicably transported to Mars where he becomes reluctantly embroiled in a conflict of epic proportions amongst the inhabitants of the planet, including Tars Tarkas (Willem Dafoe) and the captivating Princess Dejah Thoris (Lynn Collins). In a world on the brink of collapse, Carter rediscovers his humanity when he realizes that the survival of Barsoom and its people rests in his hands.

The State of the Internet

That's one pretty nifty HTML5 interactive infographic with some interesting facts to boot.