I use IDEA for most of my development, but since I work with many different companies, I often have to use Eclipse too. Every couple months or so, I make a point to start a new personal project in Eclipse, just to keep up to speed.

Today was the day. As I was starting to set things up, I asked Cédric a few questions about shortcuts in Eclipse. As I was lamenting about how I felt so unproductive using Eclipse, he mentioned something I totally agree with. It's all a matter of mindsets.

The more I work with IDEA, the more I find Eclipse's ways counter-intuitive. For example, I was asking about a shortcut to create a class. Cédric mentioned starting with ctrl-n, which is really nifty. Except that when I first looked for it, I could not find it. Why? Because it is labeled as "Other…" under the File->New menu options. 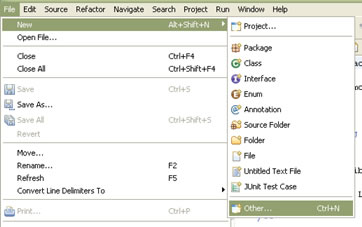 My IDEA-mindset automatically assumed that "Other" meant everything but what was listed above.

The morale of the story. I need to spend more time with Eclipse on a regular basis.