TestNG Generator is an IDEA plugin, based on Alex Nazimok's JUnit Generator.

It is a very simple plugin that generates a TestNG test class skeleton for all of the current class methods. 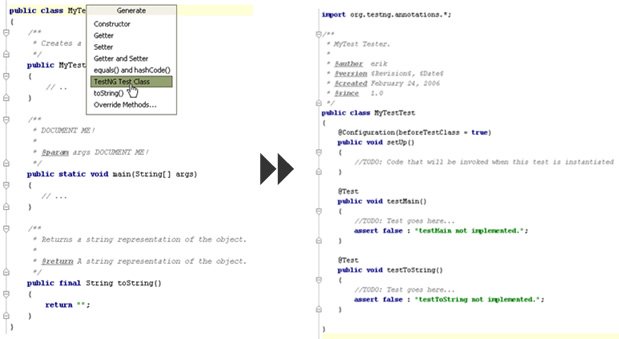 Alex did all the work. I just added a few things here and there.

There's still more I'd like to do: TestNG Generator is currently available through the IDEA Plugins manager. The source archive can be found on the IntelliJ Community Wiki. As usual, the latest souce code is also in my public subversion repository.

I like unitTest plugin's ability to create tests individually and display an intention/hint in the sidebar for the ones that don't have a test. Something like this would be great for this and/or TestNG-J.

Thanks for creating this plugin. It already takes me halfway there!

This looks like a cool idea. I would like to ask you how is the generated class behaving in the following scenarios: original class method rename refactoring, original class rename refactoring, regeneration of the test class after read test code was added. I was always wondering how such a plugin should behave in these simple scenarios, but till now I haven't been able to come out with a good solution. Hopefully, you have the answers.

In other words, I don't think I have the perfect solution, unless you can come up with some kind of mechanism to identify the implied relationship whenever applicable.

Unfortunately, it looks like we both have identified the same set of problems when speaking about refactorings. As I told you, I've been thinking about this (indeed sporadically) for a long time, and I don't think we can really do a good job. It would require to have some persistent metadata on test side that would link it to the original code. I've seen attempts to generate some special comments to keep this kind of metadata, but as you can imagine this is not immediately supported even by the most advanced IDE.  While speaking about persistent metadata, I have also thought about having a special annotation that would do this. Maybe we should further investigate this option and see if we can take something out of it ;-).

I haven't done a lot of thinking about this, but how about using a similar mechanism as the @see Javadoc tag:

Not quite sure how that would translate using the annotations syntax though.

That's exactly what I've been thinking about. Maybe we should move this offline and get into some more details. You never know what may come out ;-). Please drop me an email and we can continue there.

Hi,
the plugin doesn't work with IDEA 8. Is an update planned?

I really don't have time to seriously look at it right now. There're a couple people who have indicated they would try to get it to work with IDEA 8, but I haven't seen anything concrete yet.