IDEA can export Java source code to HTML, which I find quite useless. I really like the way Java2Html works but there is no integration with IDEA.

You can easily setup an External Tool in IDEA using the Java2Html command line options.

The problem is that I also wanted to: I created a simple batch file to help me accomplish my goal... What does it do? To use it, simply place it in the same directory as the Java2Html jar, in my case C:\java2html.

The only thing left to do was to create the External Tool entry in IDEA, as follows: 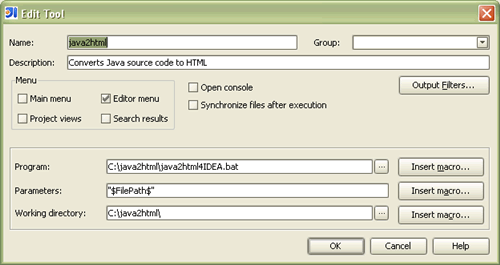 I've been playing with TestNG for a few days now. I really like it. It makes me want to write more tests.

I was wondering if there was a way to create a test for a private method, so I went to the source. I asked Cédric about it. He mentioned that I should use the Reflection API.

The goal was to write a test for the validate method in the following class:


In order to invoke the validate method in my test, I simply needed to: as follows:

Bob emailed me the following:

I would just make the method package-private (default access) and put the test in the same package.

As I told him, friendly access doesn't always work for me because of the way I obfuscate private methods. I could make exceptions in my obfuscator settings, but that's a lot more work.