I don't know about that one. It's a definite maybe.

Political Quote of the Day 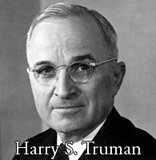 "Republicans approve of the American farmer, but they are willing to help him go broke.

They stand four-square for the American home—but not for housing.

They endorse educational opportunity for all—but they won’t spend money for teachers or for schools.

They think modern medical care and hospitals are fine—for people who can afford them.

They consider electrical power a great blessing—but only when the private power companies get their rake-off.

They think American standard of living is a fine thing—so long as it doesn’t spread to all the people.

And they admire of Government of the United States so much that they would like to buy it."